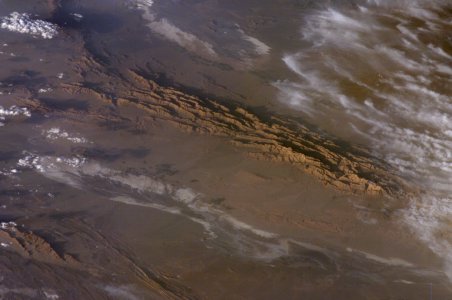 Mount Damavand, Iran's highest point, is located in Amol County, Mazanderan.
Iran consists of the Iranian Plateau with the exception of the coasts of the Caspian Sea and Khuzestan Province. It is one of the world's most mountainous countries, its landscape dominated by rugged mountain ranges that separate various basins or plateaux from one another. The populous western part is the most mountainous, with ranges such as the Caucasus, Zagros and Alborz Mountains; the last contains Iran's highest point, Mount Damavand at 5,610 m (18,406 ft), which is also the highest mountain on the Eurasian landmass west of the Hindu Kush.

The northern part of Iran is covered by dense rain forests . The eastern part consists mostly of desert basins such as the Dasht-e Kavir, Iran's largest desert, in the north-central portion of the country, and the Dasht-e Lut, in the east, as well as some salt lakes. This is because the mountain ranges are too high for rain clouds to reach these regions. The only large plains are found along the coast of the Caspian Sea and at the northern end of the Persian Gulf, where Iran borders the mouth of the Shatt al-Arab (or the Arvand Rūd) river. Smaller, discontinuous plains are found along the remaining coast of the Persian Gulf, the Strait of Hormuz and the Gulf of Oman. 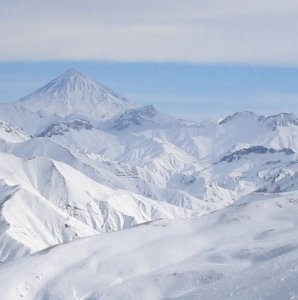 Climate
Iran's climate ranges from arid or semiarid, to subtropical along the Caspian coast and the northern forests. On the northern edge of the country (the Caspian coastal plain) temperatures rarely fall below freezing and the area remains humid for the rest of the year. Summer temperatures rarely exceed 29 °C. Annual precipitation is 680 mm in the eastern part of the plain and more than 1,700 mm in the western part.

To the west, settlements in the Zagros basin experience lower temperatures, severe winters with below zero average daily temperatures and heavy snowfall. The eastern and central basins are arid, with less than 200 mm of rain, and have occasional deserts. Average summer temperatures exceed 38 °C. The coastal plains of the Persian Gulf and Gulf of Oman in southern Iran have mild winters, and very humid and hot summers.

One of the most famous members of Iranian wildlife is the critically endangered Asiatic cheetah, also known as the Iranian Cheetah, whose numbers were greatly reduced after the Iranian Revolution.