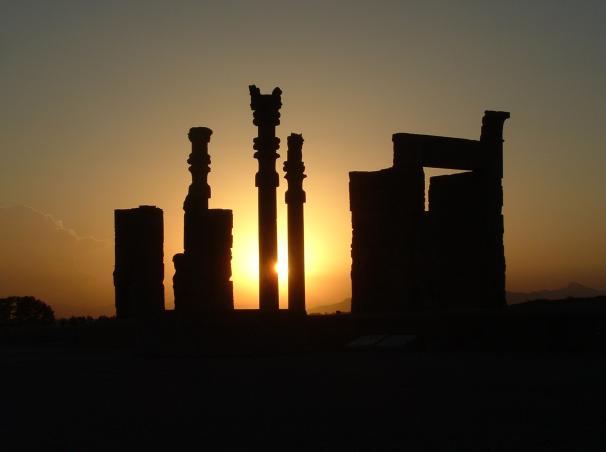 Culture
Culture by one definition is the collective programming of the human mind that distinguishes the members of one human group from those of another. Persian culture therefore reflects the collective mindset of the Persian people throughout time, whether Persian is meant in an ethnic sense or a culturally inclusive pan-ethnic sense.

From the early inhabitants of Persis, to the Achaemenid, Parthian, and Sassanid Empires, to the neighbouring Greek city states, to the Caliphate and the Islamic world, all the way to the modern day Iran and such far places as those found in India, Asia, and Indonesia, Persian culture, has been either recognized, incorporated, adopted, or celebrated. The unique aspect of Persian culture is its geo-political context and its intricate relationship with the ever changing Persian political arena once as dominant as the Achaemenids stretching from India in east to Libya in west, and now limited to Iran stretching from Afghanistan, and Pakistan in the east to Iraq and Turkey in the west. It is this ever-changing reach within the Iranian plateau that brought Persians face to face with Babylonians, Greeks, Egyptians, Scythians, Arabs, Turks, Mughals, Hindus, North Africans, and even the Chinese, allowing them to influence these populations with their cultural norms all the while being influenced by them in what can best be described as a "reciprocal cultural receptivity". 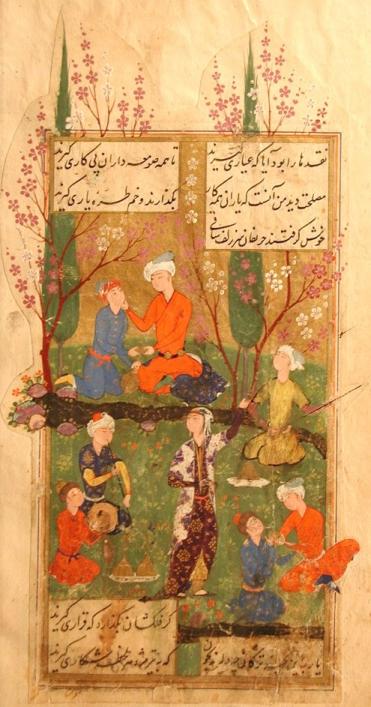 Very few literary works of Achaemenid Persia have survived, partly due to the destruction of the library at Persepolis. Most of what remains consists of the royal inscriptions of Achaemenid kings, particularly Darius I (522–486 BC) and his son Xerxes.

The 13th century marks the ascendancy of lyric poetry with the consequent development of the ghazal (sonnets) into a major verse form, as well as the rise of mystical and Sufi poetry. This style is often called Araqi (Iraqi) style, (western provinces of Iran were known as Persian Iraq (Araq-e-Ajam) and is known by its emotional lyric qualities, rich meters, and the relative simplicity of its language. Emotional romantic poetry was not something new however, as works such as Vis o Ramin by Asad Gorgani, and Yusof o Zoleikha by Am'aq Bokharai exemplify. Poets such as Sana'i and Attar (who ostensibly have inspired Rumi), Khaqani Shirvani, Anvari, and Nizami, were highly respected ghazal writers. However, the elite of this school are Rumi, Sadi, and Hafiz Shirazi.

One Thousand and One Nights is a medieval folk tale collection which tells the story of Scheherazade, a Sassanid queen who must relate a series of stories to her malevolent husband, King Shahryar, to delay her execution.

The stories are told over a period of one thousand and one nights, and every night she ends the story with a suspenseful situation, forcing the King to keep her alive for another day. The individual stories were created over several centuries, by many people from a number of different lands.

Painting and miniature
Oriental historian Basil Gray believes "Iran has offered a particularly unique art to the world which is excellent in its kind". Caves in Iran's Lorestan province exhibit painted imagery of animals and hunting scenes. Some such as those in Fars Province and Sialk are at least 5,000 years old.
Painting in Iran is thought to have reached a climax during the Tamerlane era when outstanding masters such as Kamaleddin Behzad gave birth to a new style of painting. Paintings of the Qajar period, are a combination of European influences and Safavid miniature schools of painting such as those introduced by Reza Abbasi. Masters such as Kamal-ol-molk, further pushed forward the European influence in Iran. It was during the Qajar era when "Coffee House painting" emerged. Subjects of this style were often religious in nature depicting scenes from Shia epics and the like. 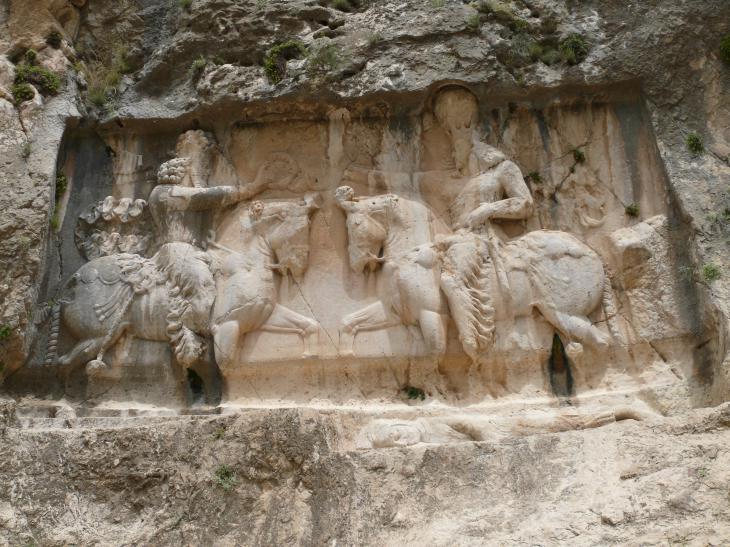 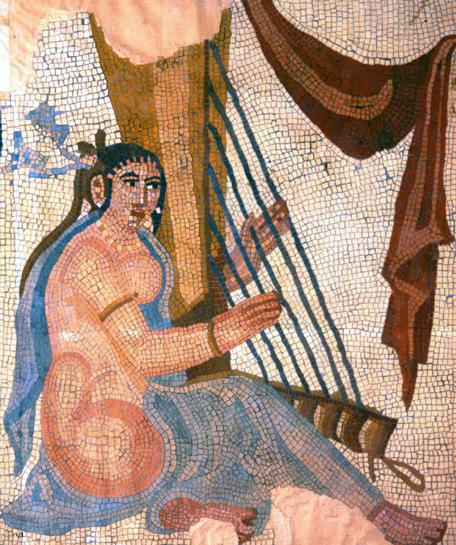 Architecture
Architecture is one of the areas where Persians have made outstanding contributions. The most prominent ancient examples some of which are still extant today, are the work of the Achaemenids hailing from Persis. The quintessential feature of Persian Achaemenid architecture was its eclectic nature with elements of Median, Assyrian, and Asiatic Greek all incorporated. Achaemenid architectural heritage, beginning with the expansion of the empire around 550 BCE, was a period of artistic growth that left an extraordinary architectural legacy ranging from Cyrus the Great's solemn tomb in Pasargadae to the splendid structures of the opulent city of Persepolis, and such historical sites as Naqsh-e Rustam.
With the advent of the second Persian Empire, the Sassanid dynasty (224–624 CE), revived Achaemenid tradition by construction of temples dedicated to fire, and monumental palaces. During the Sassanid Persian Era, multiple architectural projects took place some of which are still existing including Palace of Ardashir, and Sarvestan Palace in Sarvestan to name a few. Certain ancient architectural sites have existed to date and some have even been in use till recent times; one such example is the Arg-é Bam a massive structure at 1,940,000 square feet (180,000 m2) constructed on the Silk road, in Bam around 500 BCE and was in use till 1850 CE Bam is now a UNESCO World Heritage Site. 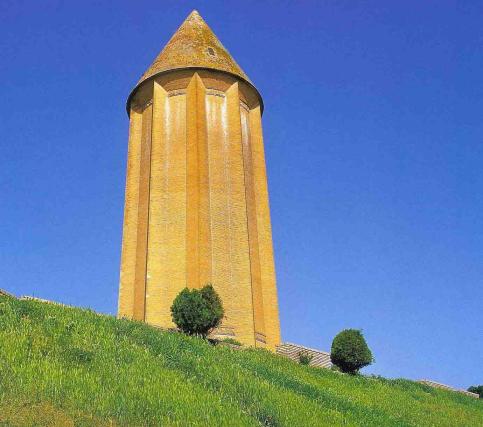 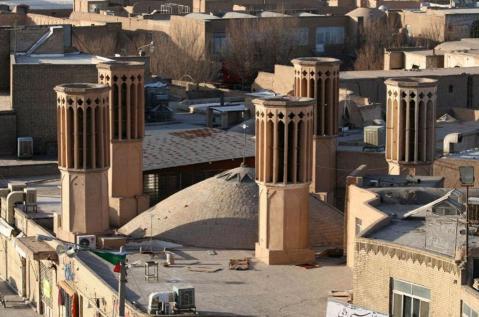 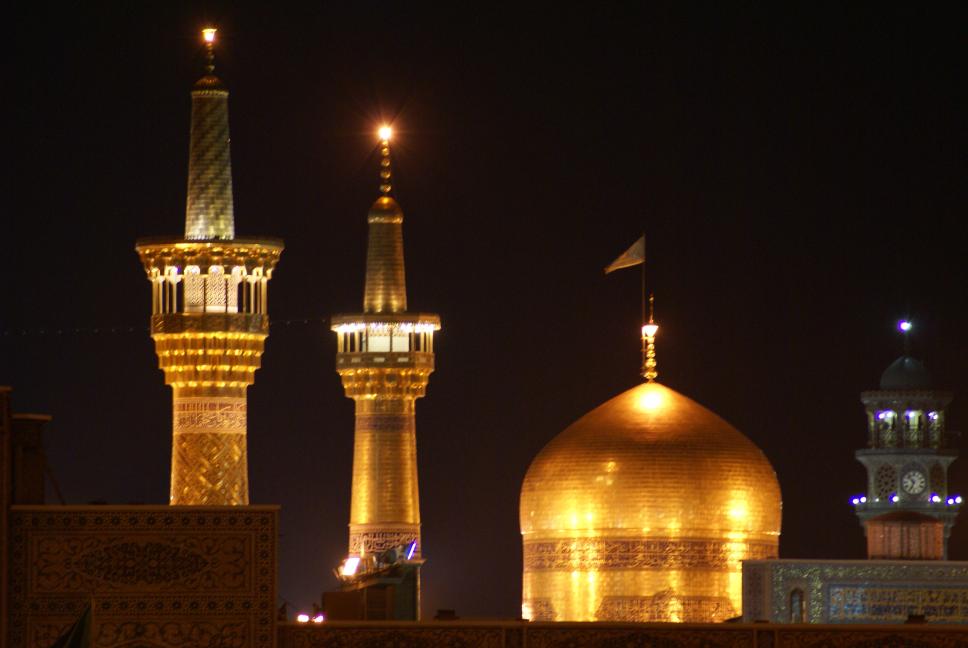 Persia was in many sense the first permanent home of carpet weaving, and while robbed of much of her political power, and only a shadow of her former self, still holds up to the ideals of textile art, well worth a comprehensive study. World's oldest existing carpet, Pazyryk carpet, a pile-carpet dating back to 400–300 BCE discovered in 1949, depicts clear elements of Assyrian and Achaemenid design, including stylistic references to stone slab designs found in the palaces of the Persian Empire. Rug and carpet artistry is well recognized in Persia, as Xenophon describes carpet production in the city of Sardis, then a province of the Achaemenid Empire, stating that the locals take pride in their carpet production.

When the Byzantine emperor Heraclius pillaged the palace of Khusrau II of the Sassanid Persia, he found various luxurious textiles including carpets that were embroidered with needles, most likely a pile carpet. A 7th century Sassanid stone carving at Taq-i-Bustan depics a fabric draped over the side of the boat, most likely a pile carpet. One of the most famous Sassanid era, Persian rugs was a carpet known as "Spring of Kusrau" depicting a pleasure garden, worked with gold, and silver, and embroidered with jewels and colored stones.

Islamic geographers record Mazandaran, one of the provinces of Persia as important carpet weaving center in third to 9th century, while in fourth and 10th century Bukhara, as well as Khuzistan and Pars in southern Persia are also cited as notable production centers. 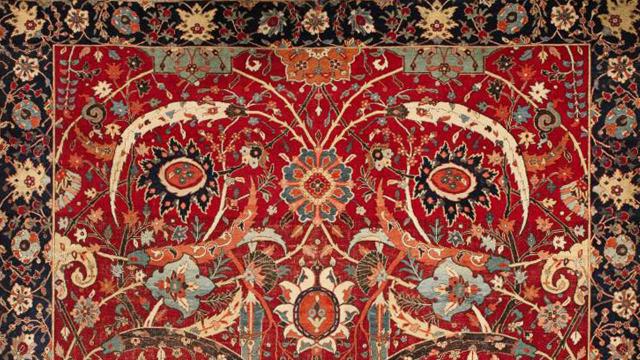 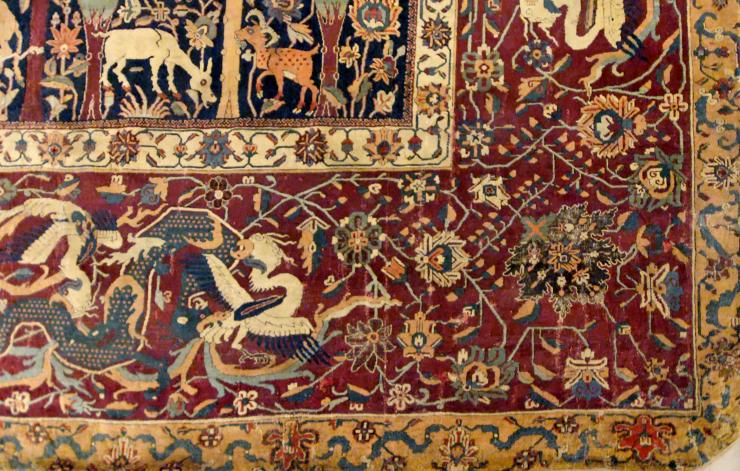 Modern Persian painting
Master Mahmoud Farshchian was born in Isfahan on January 24, 1930. Growing up, he was surrounded by many architectural masterpieces that gradually and subliminally sharpened his awareness of proportion, color, and form. At the age of five, it became evident that his life would be devoted to art and painting.
While still in school, Farshchian was invited to learn painting from the famous masters of the time. After graduating from the Academy of Fine Arts in Isfahan, he traveled to Europe to study the works of Western artists. Upon his return to Isfahan, Mahmoud began working in the General Office of Fine Arts (later the Ministry of Culture and Art).
Farshchian later moved to the United States and currently resides in the New York metropolitan area. When he came to the United Stated, Farshchian brought with him many treasures which were welcomed by Bibliotheque Nationale, The British Library, Freer Gallery of Art, Metropolitan Museum, and Harvard University. His works continue to be exhibited in galleries and museums throughout Asia, Europe and the United States, as well as in private collections. Master Farshchian has received many awards throughout his life, including a doctorate in fine arts. He has also received much praise from European academies and museums. 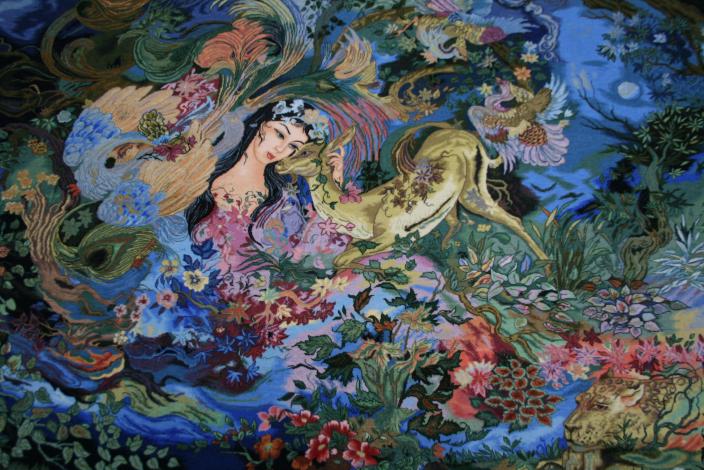 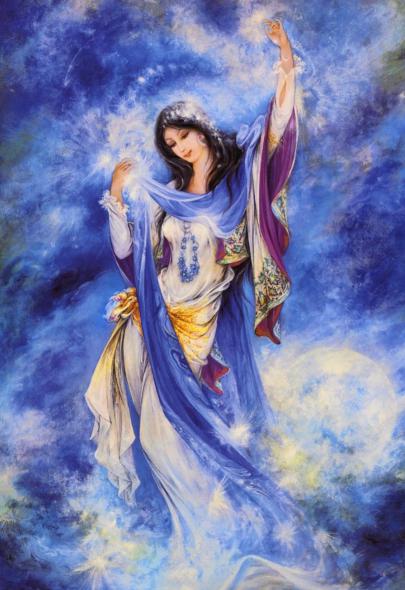